Dick started his location catering journey back in 1978 on a feature film called Riddle of the Sands, staring Michael York and Jenny Agutter, and after working for several catering company's set up Take Five in 1984. His experience is second to none in the location catering industry having travelled the world working on every type of productions imaginable. From feeding 2000 extras on Corfu to looking after a 8 crew documentary on a Yacht in the Caribbean.

Ross joined the team in 1998 after two years traveling Asia and Australia where he worked in all types of restaurants and bars picking up the sort of skills needed in the high pressure job that is location catering . Ross is at his best when under pressure, cool and calm he makes sure that what ever is required from a production it is of the highest quality, on time with no fuss. A total team player that's needed on all productions. 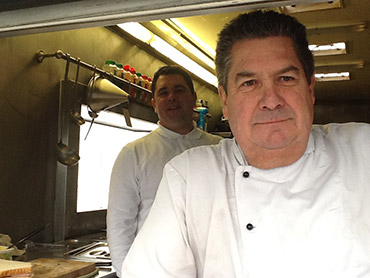 Watch Us On MasterChef